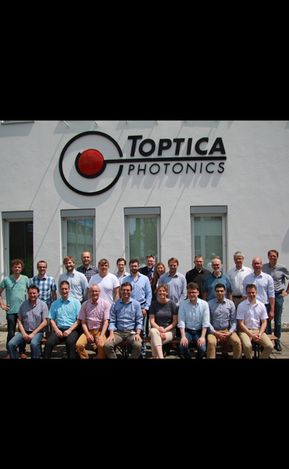 The first pilot project "optIclock" within the German initiative on quantum technologies of the German Federal Ministry of Education and Research (BMBF) has started in May 2017. The goal of the project led by TOPTICA Photonics AG and the Physikalisch Technische Bundesanstalt (PTB) is to realize a demonstrator device for an optical ion clock. The research consortium of 10 partners from industry together with scientific institutes has a financial volume of 6 Million Euro at its disposal, including significant contribution from the industrial partners.

Applications of such devices are the direct measurement of time, the precise synchronization of large networks or distributed radio telescopes, navigation in general as well as the improvement of global satellite navigation systems. The device can also be deployed as specialized quantum sensor.

The photo was taken at Kick-off meeting that took place on the 21st of June 2017 at TOPTICA’s premises. Find out more at www.opticlock.de and in the press release at http://www.toptica.com/toptica-news/german-quantum-initiative-qutega-starts-with-optical-single-ion-clock/