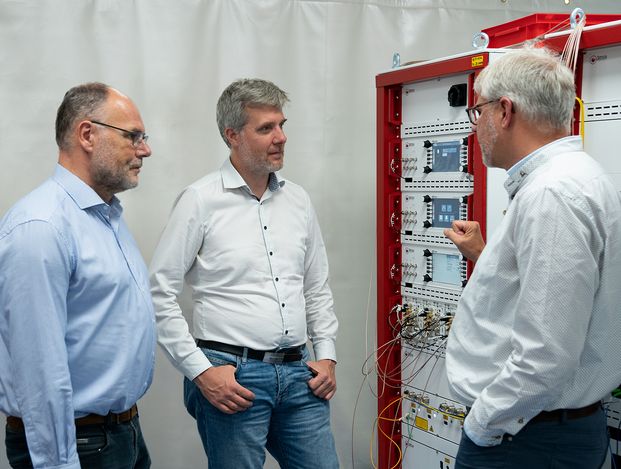 Picture: Dieter Janecek in conversation with the two board members Dr. Wilhelm Kaenders (right) and Dr. Thomas Renner (left) during a visit to the Graefelfing-based laser manufacturer TOPTICA.

The economic policy spokesman of the B'90/Green parliamentary group Dieter Janecek visited the Graefelfing-based laser manufacturer TOPTICA. Not only complex export controls and the situation on the job market pose high challenges for medium-sized businesses, but also the multitude of regulatory interventions.

Dieter Janecek, Member of the Dt. Bundestag, is the spokesman for the digital economy and digital transformation for the Bündnis 90/Die Grünen parliamentary group. In this role, he visited the near-Munich-based company TOPTICA. In addition to topics such as Germany's role in the international technology environment or the current employment market issues, the problems with export controls were also discussed.

During the discussion with the Member of the Bundestag Janecek, the two CEOs Dr. Kaenders and Dr. Renner discussed Germany's special role as a high-tech country, especially regarding the increasingly important quantum technology, in the development of which TOPTICA has played a central role internationally for years. The successful recruitment and transfer of skilled personnel from abroad was an important topic. In particular, the unclear regulations in export control and sanction testing were addressed. These are necessary, but lead to months, often years of uncertainty for the company, and thus impair the strongly export-oriented German high-tech SMEs in their globally leading role.

"The growth potential of photonics is enormous," explains Dr. Thomas Renner, Member of Executive Board (CSO) of TOPTICA. "According to the German industry association SPECTARIS, experts forecast average annual growth of more than six percent and total sales of almost 60 billion Euros by 2025 for the German photonics industry alone. However, political and economic restrictions on the subject of personnel recruitment from non-EU countries, as well as export controls and complex sanctions checks, are slowing down economic growth." Dr. Wilhelm Kaenders, founder of the company, added that TOPTICA, even in the crisis years, could show growth rates of 20%, but is currently affected by external factors, such as supply bottlenecks and shortage of skilled personnel, so that they would like to see greater clarity at least in the formal processes.

"Getting this information from the people on the front lines is really important for our process," says Dieter Janecek, who is also a member of the Dt. Bundestag's Committee on Economic Affairs. "We are aware of the special role played by small and medium-sized businesses in Germany, and we are always pleased to receive relevant categorizations. We promote our ideas for an ecologically oriented economy together with the companies. Many board members and managers are already taking advantage of these dialogues because they long for a reliable political framework, and not just for climate protection."

For Janecek, as a parliamentary group spokesman, the ecological transformation of the economy is one of his main goals.
Finally during his visit, Mr. Janecek was shown current TOPTICA laser systems for the construction of state-of-the-art quantum computers, which are developed and produced in special clean rooms in Graefelfing near Munich. In an exemplary manner, after his visit Mr. Janecek traveled by public transportation to his next appointment.