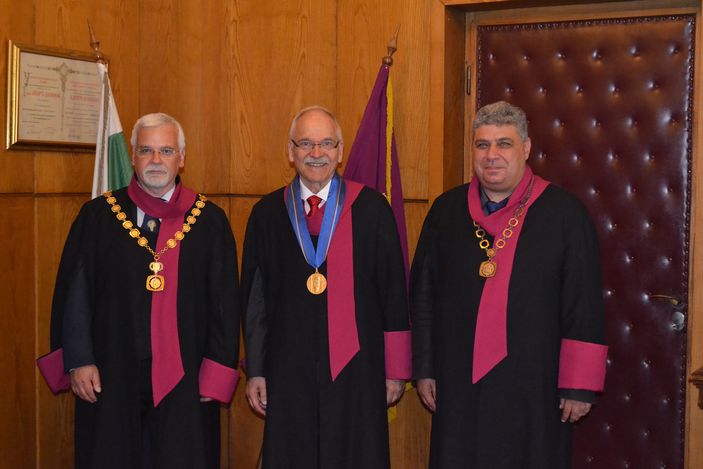 With Prof. Dr. Klaas Bergmann, an exceptionally creative experimental physicist is being honored, who has drawn attention through his pioneering work in the field of laser spectroscopy. A TOPTICA employee since many years, Klaas Bergmann has been helping to shape the field of cold atom physics over many decades in his academic role, and, after his official retirement, supports our company’s development by his deep insights and future visions, in particular starting in 2016 for TOPTICA Projects GmbH, an innovative technology spin-off focusing on Guide Star Lasers and dimensional measurement technology.

With Prof. Dr. Nikolay. V. Vitanov, Vice-Rector of the University of St. Kliment Ohridski, Sofia/Bulgaria, there has been a close partnership for many years, which is also supported by the German Research Foundation (DFG). Further active and productive collaborations exist with colleagues from Yerevan (Armenia), Riga (Latvia) and Kiev (Ukraine). Not only from this circle, many visiting scientists and students came to TU Kaiserslautern every year to collaborate experimentally and theoretically on the research projects.

In a special way, the STIRAP (Stimulated Raman Adiabatic Passage) method developed and analyzed by Bergmann is today associated with his name worldwide. With this method, he achieved an important breakthrough in the optical control of molecular quantum states about thirty years ago: Namely, the STIRAP method allows the targeted and, most importantly, complete transfer of a population from one quantum state to another. It has quickly found numerous imitators and users wherever controlled quantum processes play an important role - from atomic physics and quantum optics to chemical reaction dynamics and even ultrafast solid-state processes.

Professor Bergmann was active in the physics department at TUK until 2007, and then held a senior research professorship until the end of 2015. Since 2017, he has been working in industry in the field of laser measurement technology for TOPTICA Projects.

The Senate of Sofia University had already decided in December 2019 to award Bergmann an honorary doctorate. Due to Corona, the ceremony to present the certificate was postponed several times. Now it finally took place on May 27, 2022.

About TOPTICA
TOPTICA has been developing and manufacturing high-end laser systems for scientific and industrial applications for more than 20 years. Our portfolio includes diode lasers, ultrafast fiber lasers, terahertz systems and optical frequency combs. TOPTICA today has 450 employees in 6 commercial entities with a consolidated group revenue of 100 Mio € (about 107 Mio $).