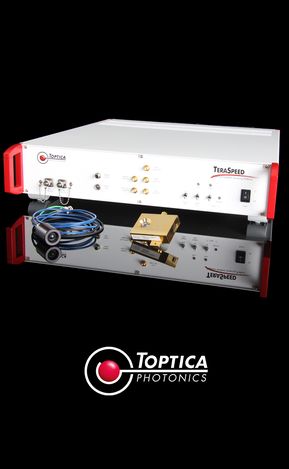 TOPTICA celebrates 10 years of terahertz activities! At LASER Munich 2007, TOPTICA presented their first continuous-wave terahertz system, having teamed up with researchers at the universities of Frankfurt/Main and Darmstadt. Today, TOPTICA's terahertz products have found their way into both scientific labs and industrial installations in more than 30 countries around the globe. At the same time, TOPTICA has maintained a close collaboration with some of the leading research institutes both in Germany and abroad.

TOPTICA continues manufacturing continuous-wave systems: The TeraScan combines tunable laser technology with state-of-the-art photomixers and carefully designed, high-precision electronics. With a peak dynamic range greater than 90 dB and a frequency resolution on the megahertz level, the TeraScan sets new benchmarks for high-resolution frequency-domain spectroscopy. For time-domain terahertz applications, the TeraFlash enables broadband measurements with an unprecedented bandwidth of more than 5 THz. Whenever measurement speed matters, users can activate a fast-scanning mode and record up to 40 pulse traces per second.

Even higher data rates become possible with the latest member of TOPTICA's terahertz family, the TeraSpeed: This ultrafast screening platform serves applications in quality control and process monitoring that require no spectral information, but call for terahertz intensity measurements at "extreme" speeds. The TeraSpeed system is capable of detecting individual terahertz pulses at repetition rates as high as 100 MHz. An integrated data-processing unit converts the detected pulses to RMS values, enabling data streams at sampling rates of up to 500 kHz – orders of magnitude faster than any conventional terahertz system.

TOPTICA's terahertz systems have helped to close the infamous "terahertz gap", and have shown their potential in a broad range of industrial applications, including plastic inspection, trace gas sensing, and the analysis of thin paint layers. In scientific research, the systems have been employed for research on metamaterials, waveguides, terahertz microresonators, plant physiology and molecular spectroscopy, to name just a few. A list of publications that feature the aforementioned systems is available upon request.