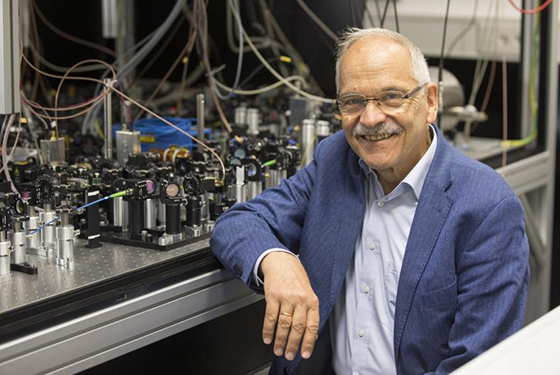 We congratulate our dear colleague Prof. Klaas Bergmann on being awarded the highly prestigious APS Davisson-Germer Prize in Atomic and Surface Physics!

The laser induced process, broadly known as  STIRAP (Stimulated Raman Adiabatic Passage), developed by Klaas and his team, has thus gained, not for the first time, international recognition even after more than 25 years. It has become an indispensable control tool for Quantum Technology, meaning the deterministic control of atomic coherence.

Emeritus physics professor Klaas Bergmann has been awarded the Davisson Germer Prize 2020 by the American Physical Society (APS) and will be presented to him at the DAMOP conference in Portland in June next year. This prize is considered one of the highest honors in the field. The previous 27 laureates from atomic physics include five later Nobel laureates.

"For the invention of Stimulated Raman Adiabatic Passage (STIRAP) that became universally used for coherent transfer in quantum systems with unprecedented efficiency and robustness."

The 51st Annual Meeting of the APS Division of Atomic, Molecular and Optical Physics (DAMOP)  will be held in Portland, Oregon, USA. All technical sessions will be held in the Oregon Convention Center. The headquarters hotel is the Hilton Portland Downtown in the heart of downtown Portland, and is a short light-rail ride to the convention center. More information

Klaas Bergmann, Physics Professor, retired from the Technische Universitaet Kaiserslautern (TUK) in 2007, but remained involved ever since. He studied physics at Freiburg (PhD 1972, adviser W. Demtroeder) and did postdoctoral work at Berkeley (1973-1974, host C.B.Moore). He was appointed assistant professor at the TUK in 1975 and professor in 1981, was visiting fellow at JILA in 1985 (host S.R. Leone). He coordinated many national and international cooperative research projects, chaired several international conferences, was 2003 - 2008 member of the TUK-Hochschulrat (a governance body) and served as vice-chair and chair of the physics panel in the Marie-Curie Innovative Training Network (ITN) program of the EU (2008 – 2017). Since 2017 he is employed as scientific head of a development project (laser ranging) by TOPTICA-Projects (Graefelfing/Munich). A characteristic feature of his scientific work is the development of laser-based methods allowing novel experiments in collision dynamics and quantum optics. Memberships: APS (fellow since 1992), German Physical Society (GPS), OSA and European Physical Society. Honors and Awards: Goedecke Research prize (1972, Freiburg), Physics prize (1981, GPS), Robert-Wichard-Pohl prize (2003, GPS), Max-Planck-Research prize (2003), Honorary doctoral degree (2003, Latvian University Riga), Order of Merit (State of Rhineland-Palatinate, 2005), Nature Award for Mentoring in Science (2008), and Senior-Research-Professorship (TUK 2007 – 2015).