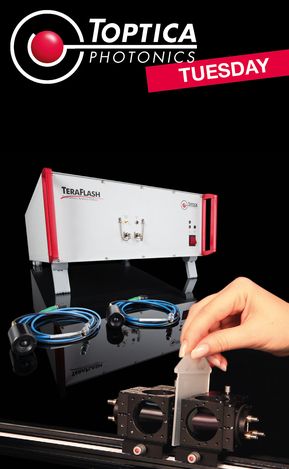 Many polymeric materials appear – more or less – transparent for terahertz radiation. Researchers and engineers have successfully exploited this behavior for contact-free analysis and non-destructive testing. For example, pulsed terahertz radiation can uncover the thickness of an object, using an "echolocation" technique: In reflection-mode measurements, terahertz pulses strike the object under test, and its front and back side each reflect a part of the incident pulse. The time-of-flight difference, i.e. the time elapsed between the arrivals of the pulse echoes from either side, is directly proportional to the optical thickness of the layer. The method still works if the object consists of several different layers, and TOPTICA's customers have resolved layers down to 10-20 µm, even in ternary and quaternary materials.

Applications of terahertz radiation for plastic inspection are not limited to just thickness measurements. A spatial scan of a sample with a terahertz beam generates three-dimensional images of the sample, which can unveil sub-surface cracks, voids and delaminations.

In addition, spectroscopic techniques determine the absorption coefficient and refractive index of compound materials. These measurements provide information about the sample composition and internal structure.