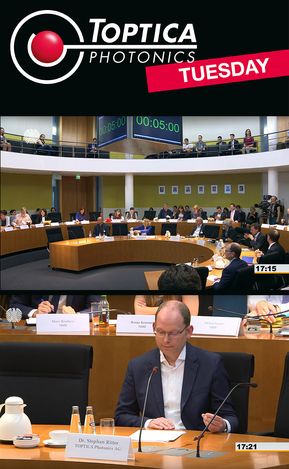 The Committee on the Digital Agenda (Ausschuss Digitale Agenda) of the German federal parliament, the Deutsche Bundestag, discussed the status of quantum computing.

Seven key experts explained their view on current and future perspectives in the field. The increasing relevance of industrial partners in the field of quantum computing is highlighted by the invitation of Dr. Stephan Ritter, TOPTICA Photonics AG.

The members of the parliament were particularly interested to learn about the German and European position in the international scene with respect to fundamental and applied research, technological capability as well as the development of potential business models. Dr. Ritter emphasized the close connection of quantum-computer technology to quantum sensing, quantum communication and quantum metrology, which allows driving the various fields in parallel. He also stressed the important immediate role of quantum-enabling tools, e.g. lasers, in which Germany already holds a globally important position.

Video of the public session of The Committee on the Digital Agenda,
starting at the opening statement of Dr. Ritter:
<iframe width="560" frameborder="0" height="315" src="https://www.youtube.com/embed/07aPWD2HzFE?rel=0&amp;start=252" allow="autoplay; encrypted-media"></iframe>